hi this is ma.....I'd like to thank everyone who made it possible for us to journey to Nola & Memphis a good time was had by all. You often hear about the negative things our youth are doing but praise God we have a great fun & loving group. There is still a lot of work to be done in Nola & we touched only a portion of it (which is ok). we painted a house , everyone thought they were Picasso (right). Tipp gave us painting instructions and oh boy did we work. first we caulked then tapped wall to ceiling or ceiling to wall (whatever comes first ) and then we painted.....you didn't hear this from me but we have a group of painters for hire. Another work load was helping Ms Eva straighten up her trailer.We went to Congo Sq. where Fr. Oscar gave us a deep historical account of what Congo Sq. was about and what it meant to him. I could go on forever because this was a great tour, but i'd like to give some love to Cheryl, Ms Monuique & Ms Shannon for giving love back. We Love You! On to Memphis.......we met up with Fr. Tony (thank you) we renewed freindship with Bishop Steib (thank you for our tour) next we met Fr. Maurice Nutt (revival is going to be on this year) FR. took us to pray at the grave of Sister Thea (the spirit moved us) we were actually kicked out of the cemetry (closing time) to the Memphis family thank you for that warm reception & good food (I thought I cooked ribs M-M-M) and thank you Fr. Oscar for the thought of this journey. Thank you Tipp for all the hard work you've done......Thanks to all of the St.Katharine Youth Group for your hard work & support, we just couldn't do it without you!!!!
Posted by BenjaminH at 3:38 PM No comments:

Trying to wind down. Jet lag, school fear of swine flu... No seriously I have not caught up on sleep/rest yet!!!
Posted by Tipp at 4:57 PM No comments: 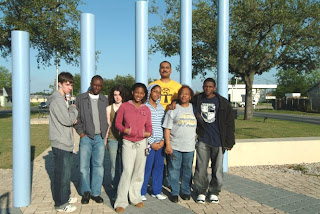 Our trip to New Orleans was interesting. I'm glad to be home though. I will never forget how much fun we had together. 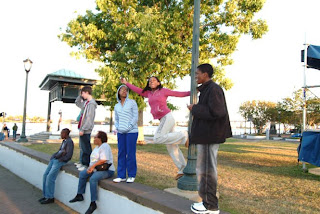 My experience were amazing. My personal favorite part was when we went to the Hurricane Katrina & Rita Memorial. But the best thing about the entire trip was the FOOD. Knowing that we were helping others made everything worth while.

My time in New Orleans was the best times of my life. It was very interesting and I would like to do it again sometime. I learned a lot while I was there that I did not know before. I think when we were sharing what we did I realized that people really care about what we did. They were soooo proud of us. One of the most things that helped me on this trip was making friends and talking to people and getting to know them, and thats one of the hardest thing for me to do.
Posted by Tipp at 3:40 PM No comments: 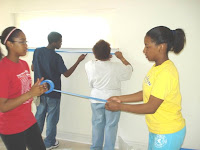 Glad to be home...was a great mission trip, I am still waiting to exhale. Thanks to all the youth who helped raise funds and those who went on the trip. You guys did an awsome job! Hope to upload some pictures later.
Peace
Tipp
Posted by Tipp at 7:41 AM No comments:

Well, we are back in Boston...I won't say that we are back home because New Orleans and Memphis are both home to us. We had a great trip. We did good work and we learned many new things; and we got to know each other better as a group. Now we all have to rush through homework before we wake up bright and early for school tomorrow, so we will post more pictures (and hopefully some video) within the next week or two.
The youth group would like to thank:
May God bless you all.
Posted by BenjaminH at 12:15 PM No comments: 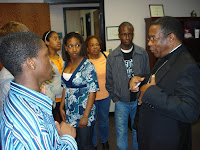 This is Mike here and I will be explaining to you our day Friday. Well in the morning we started with prayer and went to IHOP....it was an enjoyable breakfast! Especially since the waitstaff's accents were so awesome. I liked them and Father Pratt made me pay. After our lovely breakfast we went to visit Bishop Steib and he gave us a tour of the chancery facilities. We went to see Father Maurice and he took us to see Sister Thea Bowman's grave. By the way Fr. Maurice wrote the book we have been reading...Sr. Thea Bowman In My Own Words.

It was a powerful moment at the gravesite. We prayed and then went a few yards away to a headstone where over 300 African American slaves were buried in one grave.

Today we had lunch with the Sisters of the Holy Family. They were a very kind group of women who shared their stories with us. Two of the sisters had met Mother Katharine when they were young. One of them (who will be celebrating her 75th jubilee this June) was blessed personally by Mother Katharine herself. It was a strong example of how close Mother Katharine is to our church. They were all very kind to us and very happy to sit and talk with us. They told us to come back again any time we want.

After we left the Sisters, we packed up the vans, bought turkey necks, and hit the road. Tipp missed the turn about 15 minutes into the drive, so his van had to drive all the way back to New Orleans to turn around. They finally caught up in Jackson, Mississippi. We ate supper at the Waffle House...good food. Now we are leaving the Waffle House to complete our journey to Memphis.

On Tuesday morning, while the boys were working at Saint Gabriel, Renee, Chiette, Ma, and I went to help a woman living near Corpus Christi who is in the process of moving from her FEMA trailer back into her house. Seeing Miss Eva's trailer was an eye-opening experience. The entire trailer was smaller than the Saint Katharine's kitchen. There was barely any room to move around. She has been living in that trailer for two years. Our visit to the Ninth Ward on Sunday showed me how much damage the storm did, but our visit to Miss Eva's made me realize that it wasn't just the hurricane that hurt - and continues to hurt - people.
Posted by BenjaminH at 6:17 PM 1 comment:

Hi this is Obi coming through to you live from New Orleans; a beautiful, and a wonderful city. Today we painted the walls of a house that was just built. The house is owned by a choir director from the St. Gabriel Church in New Orleans. Throughout my few days here, I felt happy serving the people of New Orleans because I noticed that the people we helped out had a story to tell about the conflict they encountered with Hurricane Katrina. I personally feel overwelmed in helping out. Throughout this service trip I learned that there are certain things in this world that we take for granted and we have to learn how to take adantgae of these certain things because tomorrow is never promised.

After working, we went to Popeyes and I had a Popeyes experience. Due to my lack of knowledge regarding the food they serve there, I thought Popeyes served pizzas and burgers, however they served good tasting fried chicken so when I told Tipp I wanted a burgers and pizzas from Popeyes, Tipp started laughing and gave me a what the h__ you talking about look. Well I got to go we have mass in the morning then we have toto finish painting the house.

First of all, sorry for not posting this last night......we were all exhausted after our travels.

We got in to New Orleans in the late morning. We took two planes, and the second was so small that Fr. Pratt looked like Alice in Wonderland walking down the isle. When we got to New Orleans, we went to Xavier University and visited the Institute for Black Catholic Studies. We had lunch in the school cafeteria and then we all went to Corpus Christi and slept.

We visited the Lower 9th Ward. It looks much better than it did three years ago, when I first saw it. There are new houses being built in different areas, but most of it is still empty. (If we can find a better internet connection we will put up pictures).

Fr. Pratt took us to see Congo Square which was the only place in the South where slaves were allowed to drum. It was a meeting place for all the slaves of the area and they would meet and celebrate their own culture. We also discussed the slave exchange. It was interesting to learn that all the slaves were baptised before they were sold "just in case they had souls". We learned that the church had spoken out against slavery since the 1500s, and the morality of slavery was a constant conflict between Rome and the local bishops. (Think about this: There were black catholics serving as slaves in Florida before the British made it to Jamestown).

It was a very busy day for all of us, and everyone was drained by the end of it. I know that for Mike and me it was great to be back in New Orleans and see the differences compared to last year.
Posted by BenjaminH at 8:25 PM No comments:

The Eve of Our Trip

Well, technically, it's no longer the eve of our trip, because it's 1:45 a.m. We've been hanging out together at the parish center since nine. Tipp and Ma are the only ones who've slept, although Tipp is now awake.
Earlier in the evening we watched part of the documentary When The Levees Broke, which is about Hurricane Katrina and its aftermath. It really helped to put into perspective the work we will be doing and understand how much people lost.
We as a youth group wanted to show Tipp and Ma how much we appreciate everything they do for us, which is a lot. In preparation for our last fish fry, Ben and I went shopping for supplies with Ma, and we all played a more active role in the kitchen than we had with previous dinner sales. It made us realize how much work they do for us that we don't know about. So we surprised them both with thank-you cards and gifts. 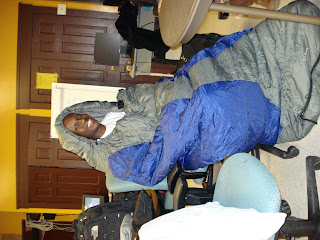 These are some pictures from church today and our sleepover tonight. 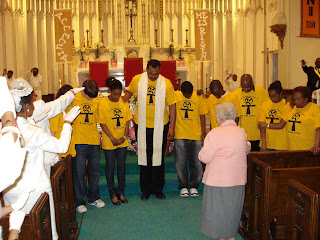 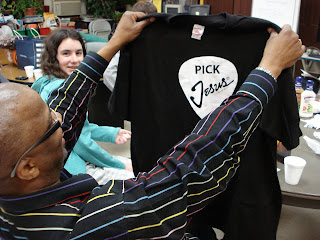 Welcome to our blog

Hello everybody. We will be blogging our trip to New Orleans/Memphis for the next week at this site. We will put up pictures (and video if we can). Thanks to everyone at church for all your support during our fundraisers this past year, you guys made this trip possible. Please pray for our journey and for our safe return. God bless.
Posted by BenjaminH at 2:27 PM 5 comments: